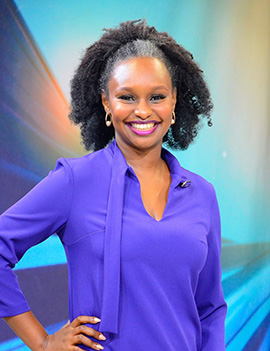 Valentine Njoroge is perhaps most famous for being a radio presenter in Kenya’s top 3 stations; and then publishing a sex column named Ask Valentine for about 10 years in The Star newspaper, also in Kenya. Currently she is the executive producer and co-presenter of The Loop on K24 (a national TV station in Kenya). The Loop is a current affairs show, focussed on feminist issues and it airs every Friday at 9pm. She is also a feminist commentator, discussing issues affecting the African woman and you can see her on BBC Africa’s #TheSheWord. The show airs in over 10 countries across the continent.

A gifted storyteller and communicator Valentine has worked in all forms of media throughout her 17 year career. From television production for MNet (The Patricia Show) to presenting various shows on local stations, and print where she started as a columnist and rose to features writer.
In the course of her writing career, it became clear that Kenyan women needed a space to discuss business, money and wealth creation and Valentine responded by launching Valentine’s Weekly, Kenya’s first women’s newspaper. It was during the life of the paper that she was invited to join the founding trustees of NFNV Kenya.

Valentine is also a founding member of The Graça Machel Trust’s Women in Media Network.
She is also the founder and CEO of dadasphere Media, a media company that creates platforms for African women to share their stories. The platforms include events, TV shows and digital content.

Valentine has built a career having difficult and sometimes taboo conversations in an honest, yet palatable manner. She is an alumnus of The State University of New York at Buffalo where she studied Computer Science and Philosophy. She is a passionate yogi who loves reading and is raising her son as a feminist.