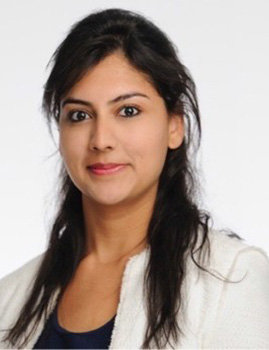 Pooja is a qualified actuary and entrepreneur. She is Co-founder of QuantaInsure, an end-to-end digital insurance platform and Co-founder of QuantaRisk, an insurance advisory firm. She grew up in Nairobi, Kenya and returned in 2018 to use her skills and experience in the East African insurance and financial markets.
Pooja is an Insurance and Risk Management subject matter expert. Her contributions include providing InsurTech solutions such as QuantaInsure to boost the insurance penetration rate and financial inclusivity. Pooja is a mentor for the Insurance Regulatory Authority of Kenya (IRA) Bima Lab programme.

In the United States, Pooja worked at Ernst & Young and Allianz Life Insurance. She has extensive experience in the Lloyd’s of London insurance market. In 2011, she joined Willis Towers Watson, a global Actuarial consulting firm. Towards the end of 2013, she moved to XL Catlin, a top global (re)insurer. Pooja worked across various departments at XL Catlin, including the Group Reserving, Emerging Markets Reinsurance, and Insurance Pricing functions.
Over the span of her career and education, Pooja has been awarded several accolades. In 2021, she was in the Top 10 Kenyan Wallstreet Angaza Awards (Top 10 Women in Banking and Finance across East Africa). In 2018, she was featured in the Business Daily Top 40 Under 40 Women. In 2015, she was awarded the Stars of the Future (Top 30 under 30) by the Actuarial Post magazine in the U.K. Upon graduation from Cass Business School, she was awarded the RSA technical award for outstanding academic achievement and contribution to the university.

Pooja completed a BSc degree in Actuarial Science/Finance at Drake University, USA, with the highest honours of Summa Cum Laude. She subsequently moved to London, England, to study an MSc degree in Actuarial Management from Cass Business School. In 2014, she earned her Fellowship as a fully qualified actuary from the Institute and Faculty of Actuaries (UK).
Outside of her career, Pooja is a strong advocate for women in business and youth mentoring. She is a Board Trustee of the Kenyan chapter of New Faces New Voices, a women in finance network. Pooja spent two years as part of the City University mentorship programme and volunteers her time to mentor undergraduate students. Also, she is a trustee of Spreading Smiles, a volunteer organisation aimed at assisting and elevating low-income communities in greater Nairobi. During her time at XL Catlin, she was part of the UK chapter of the Women of the World network (WoW). While studying for her MSc degree, Pooja was the Co-President of Cass Women in Business.